The US Census Bureau

Centers for Disease Control and Prevention 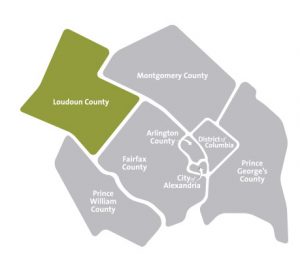 Located 25 miles from Washington, D.C., Loudoun County makes up 515.8 square miles of land. It is bounded by the Potomac River in the north; the Blue Ridge watershed to the west; Fairfax County, VA, and Montgomery County, MD, to the east; and Prince William County, VA, to the south. In July 2015, the county had a total estimated population of 375,629, a 20.3% increase from April 2010.

According to the US Census Bureau, 57.8% of Loudoun County residents identify as white, 18% as Asian, 13.6% as Hispanic, and 7.3% as black. Compared to the state of Virginia, Loudoun County has an Asian population that is more than 2 times larger, a black population that is 0.4 times smaller, and a Hispanic population that is 1.5 times larger. Loudoun is one of the wealthiest counties in the nation, with a median household income of $125,900—nearly double that of Virginia ($66,263). Fewer Loudoun residents live in poverty—3.7% compared to 11.2% in Virginia, and 17.1% of children qualified for a free or a reduced-price school lunch, compared to 41.9% of children across Virginia.

According to the County Health Rankings and Roadmaps, Loudoun County is consistently one of the healthiest counties in Virginia. The average life expectancy is 82 years of age, higher than the national average of 78.8 years. The infant mortality rate is 2.8 per 1000 live births, lower than Virginia’s rate of 5.7 per 1000 live births. Cancer is the leading cause of death among Loudoun County residents. 7.1% of adults in Loudoun County have diabetes, compared to 9% statewide. The HIV prevalence rate is 103.3 cases per 100,000 people, less than Virginia’s rate of 298.5.

Demographics of Loudoun County vs Virginia

Drug overdose is the leading cause of injury death among people 25-64 years old, causing more deaths than motor vehicle traffic crashes. Virginia saw a statistically significant (14.7%) increase in drug overdose deaths from 2013 to 2014. Opioid overdoses, whether prescription painkillers or heroin, primarily drive the death rate of 11.7 per 100,000 citizens statewide. Loudoun County is affected by the opioid “crisis” as well; its mortality rate from drug overdoses has more than doubled over the last decade, to 7 deaths per 100,000 citizens.

Although health indicators assist in understanding the health of a geographically defined population, they do not tell the whole story. For example, a baby born in census tract 6105.01 in Leesburg can be expected to live 7 fewer years than a baby born 7 miles away, in nearby Countryside (census tract 6110.03). Within these seven miles, median annual income drops from $101,713 in Countryside to $73,431 in Leesburg; the percentage of adults with at least a bachelor’s degree drops from 61.5% to 38.3%; and the percentage of black and Hispanic residents jumps from 5.5% and 5.9% in Countryside, to 14.1% and 18% in Leesburg, respectively. Other measures of health tell similar stories of inequity when broken down by race: black residents have an infant mortality rate 3 times greater than that of white residents. Amongst Medicare beneficiaries 65+, black residents have an increased rate of hospitalization due to high blood pressure, compared to their white or Hispanic neighbors; while Hispanic residents have a much lower rate of hospitalization due to heart disease.

Within Loudoun County, there are significant disparities in health amongst people of different races, ethnicities, and incomes. These differences can be partially attributed to social determinants of health, which, according to the World Health Organization, are the conditions in which people are born, grow, work, live, and age.

Although Loudoun County has a number of health resources, accessing health services proves challenging for some county residents. There is one primary care physician for every 1,350 residents of Loudoun County. Although there is no widely accepted optimal rate of physicians to total population, Loudoun is ranked in the top 90% of the United States for this metric. Inova Loudoun Hospital, a part of the not-for-profit Inova Healthcare System, is a 183-bed acute care community hospital located in Leesburg. StoneSprings Hospital Center, part of the HCA Virginia Health System, is a 124-bed center located in Dulles. Additionally, there are many urgent care centers located within the county, and Loudoun County’s local public health system provides a number of immunizations and testing for tuberculosis and sexually transmitted infections for some residents. However, the majority of these resources are located in the eastern portion of the county, between Leesburg and Sterling. For some residents in the western portion of the county, this means traveling more than 20 miles one-way to access services in Leesburg.

In addition to geography, cost may be a barrier for the 9% of Loudoun residents who are uninsured. Although this rate is lower than Virginia’s average of 14%, it remains higher than the averages of neighboring West Virginia (8%), and Maryland (7%), where Medicaid was expanded. Those without insurance or resources to pay for care rely on safety-net health care clinics for primary health care services. Inova Juniper has an HIV/AIDs clinic located in Leesburg. There is one Federally Qualified Health Center (FQHC), HealthWorks for Northern Virginia, and one free clinic, Loudoun Free Clinic, located within Loudoun County. Additionally, there are two other FQHCs in nearby counties that serve Loudoun residents.

Although Loudoun County is one of the healthiest in the country, inequities amongst its residents persist. Making Loudoun County a healthier place for all to live requires not only expanding wellness initiatives and access to quality healthcare, but also addressing the economic and social wellbeing of its citizens.

To see the data sources used for the information above about Loudoun County, click the purple tab on the right side of this page.