The DC metropolitan area has the seventh highest number of foreign-born residents among all metropolitan areas in the U.S.; nearly one in every four residents is an immigrant (24%), compared to 13% nationwide. Immigration status is complex, and not all immigrants have the same backgrounds, experiences, opportunities, or pathways to citizenship. Residents who entered the country without documentation, or those who remained after their status expired, do not hold legal status. Immigrants who entered the country legally have documentation granting them permanent or temporary status. Residents holding refugee status, asylum, and other protected statuses were granted legal admission due to violence, war, persecution, or extraordinary conditions in their home countries, and may be eligible for certain services through the Office of Refugee Resettlement. Some immigration categories enable individuals to work and/or permanently reside in the U.S. and apply for a green card. Although green cards provide a pathway to citizenship, even green card holders do not have the same access to public benefits as U.S. citizens, and unlike citizens, may become deportable under certain circumstances. As immigration statuses vary widely within communities and even families, it is a mistake to make assumptions or generalize about immigrant populations.

Immigration is a lived experience that can directly impact health due to the complex interplay of conditions in a country of origin, during migration, and in the destination country. Exposure to trauma in a home country and during travel, family separation and reunification, and adjustment to a new language, culture, and environment are a few examples of the many major stressors that immigrants living within the region may experience. Once in the United States, immigrants are more likely to experience unsuitable or unsafe housing conditions, exploitation or discrimination in the workplace, poverty, and malnutrition than native-born citizens. Social and emotional isolation and upticks in public displays of anti-immigrant sentiments may directly impact health, in addition to creating reluctance to seek assistance. Undocumented and mixed-status families may experience these and additional stressors, such as fear of deportation.

In the United States, immigration status also determines access to publicly funded health coverage, income support and other entitlement programs. Undocumented immigrants are not eligible for Medicaid, the Children’s Health Insurance Program or federally subsidized health insurance under the ACA. Undocumented immigrants are additionally barred from purchasing insurance plans available through the state and federal health care exchanges. Proof of income, state residency  and immigration status are requirements for Medicaid and CHIP eligibility. Even many lawfully present immigrants must have established residency in the US at least 5 years before becoming eligible for entitlement programs or subsidized health insurance.

To learn more about immigration as a determinant of health in this region, check out the resources below. 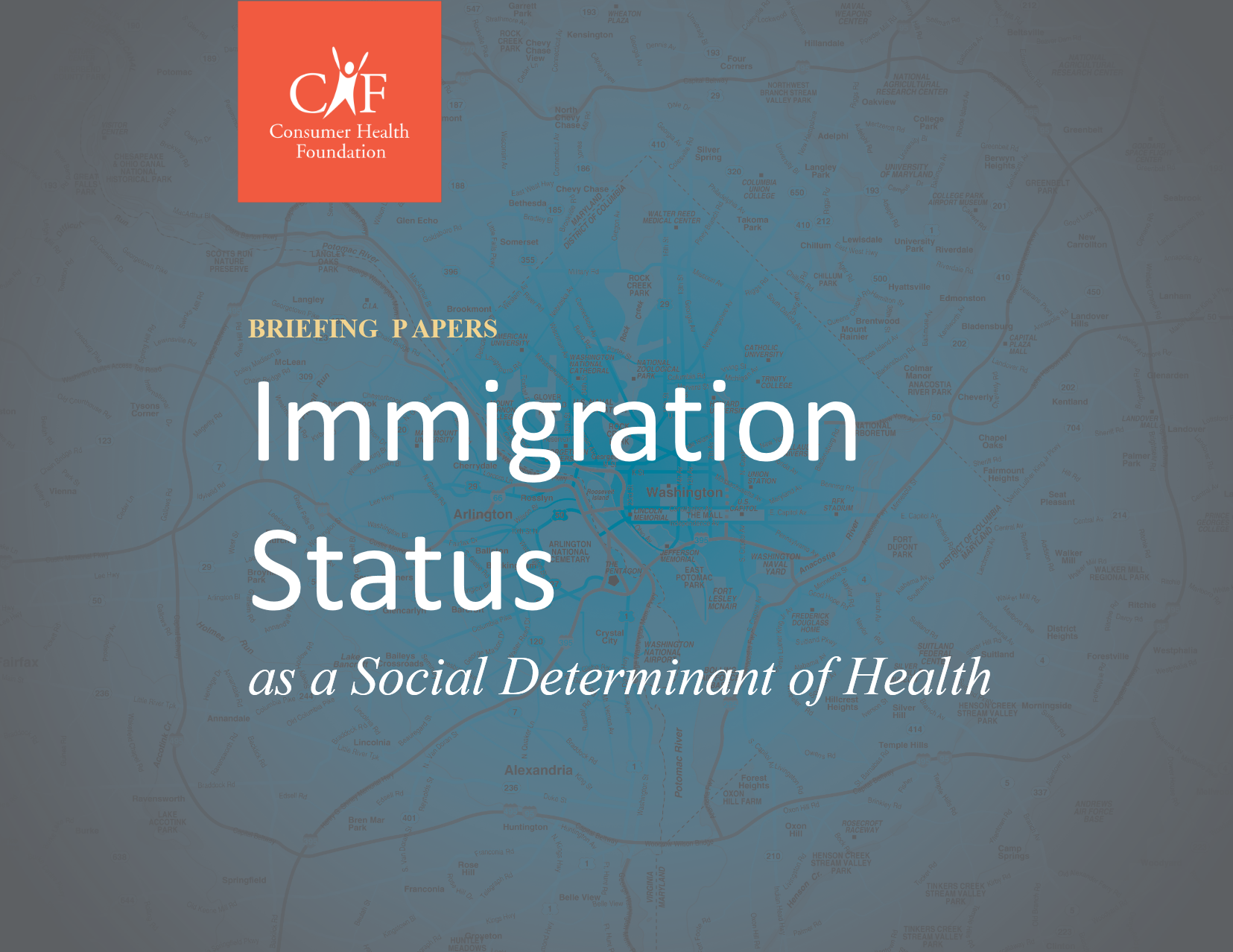 Immigration Status as a Social Determinant of Health

The Brookings Institute has identified the Washington metropolitan area as a new immigrant gateway. Immigration status is a key determinant for mental and physical health, leading to inequities between documented and undocumented immigrants, as well as between immigrant and non-immigrant populations. It is important to understand the characteristics of the region’s immigrant communities in order to better address their needs. In this briefing paper, the Consumer Health Foundation and La Clínica del Pueblo offer a profile of immigrant health in DC, Maryland, and Virginia, including:

The Kaiser Family Foundation published an issue brief on the possible early effects of the public charge rule and other immigration policies on patients at community health centers. This brief draws on interviews and survey data to capture health center directors’ and staff’s perceptions of changes in coverage and service use among their patients who are immigrants. Key findings from the report include: 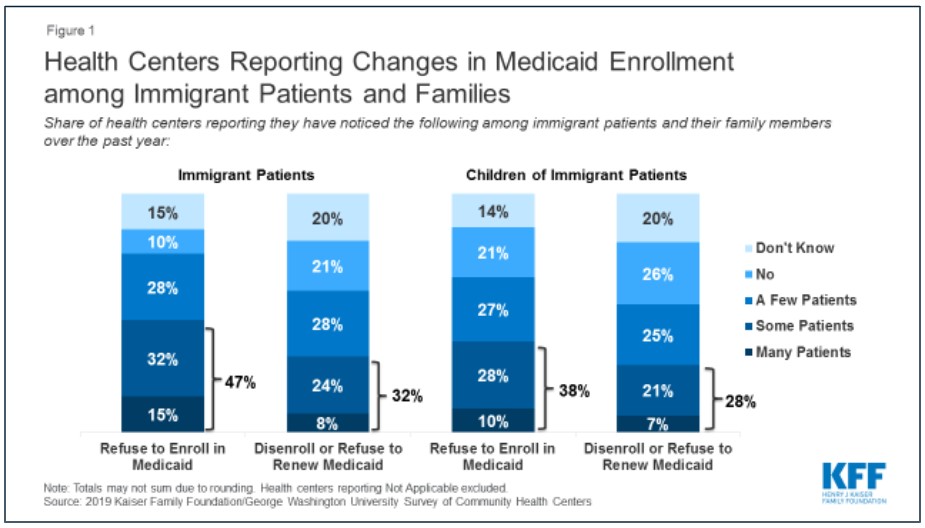 Policy Impacts on Physical and Mental Health of Immigrant Families

The National Council on Family Relations (NCFR) released a policy brief, Immigrant Families Across the Life Course: Policy Impacts on Physical and Mental Health, in July 2019 on how recent changes in immigration policy, such as policies focusing on enforcement and reducing immigration, impact both the physical health and mental health of immigrant families. The NCFR recommends shifting from policies that are harmful to immigrant families, such as the travel ban or public charge, to policies that improve health and well-being for immigrants across the life course by keeping families together. For the key points highlighted in this policy brief, see the Executive Summary.

Chilling Effects of the Proposed Changes to the Public Charge Rule

On September 22, 2018, proposed changes to “public charge” policies were announced by the U.S. Department of Homeland Security. Under this proposed rule change, immigrants may find it more difficult to obtain green cards, extend temporary visas or apply for legal status if they or their family members, including children who are U.S. citizens, use any of an expanded range of public benefits. In June 2018, the Migration Policy Institute issued a report on the chilling effects of the proposed rule change, highlighting that millions of immigrants would be discouraged from accessing health, nutrition, and social services. U.S. citizen children of immigrants who are entitled to public services and benefits could be affected as well, if their parents disenroll them from programs fearing the consequences that a “public charge” rule would bring. For more information on the implications for health coverage, see this fact sheet from Kaiser Family Foundation.

As outlined in a 2015 report by the Migration Policy Institute, unaccompanied youth fleeing violence in the Northern Triangle have been arriving to the United States in greater numbers. At least 9,000 children seeking refuge were resettled with family members in the DC metropolitan area between 2014 and 2016. In April of 2016, the DMV Coalition for Youth Seeking Refuge hosted a regional convening of newcomer immigrant youth from Central America and Mexico to address issues related to education, employment, discrimination, bullying and gangs, as well as family and community support systems. The report includes:

Between 2013 and 2015, over 102,000 unaccompanied child migrants were apprehended while attempting to cross the border between the United States and Mexico. The majority of these children were from El Salvador, Guatemala, and Honduras. The Migration Policy Institute issue brief presents the available data and qualitative research on where unaccompanied children (UACs) have been placed, how their cases are addressed by the immigration court system, what types of services are available to assist them, and how communities are adapting to their arrival in the United States.

Since 2010, more than 30,000 children under the age of 18 have immigrated to the National Capital Region, according to the 2011-2015 American Community Survey (ACS) 5-year estimates. While individual experiences differ, recently arrived children are more likely to have experienced stressors and other social determinants that lead to unique health issues. Furthermore, immigrant children from some countries may not have undergone the same health screening or received the same immunizations as U.S.-born children. They may also have been exposed to diseases not common in the United States. The DC Chapter of the American Academy of Pediatrics has developed a toolkit for medical providers in DC, Maryland, and Virginia caring for recently arrived immigrant children. The toolkit provides valuable information on: 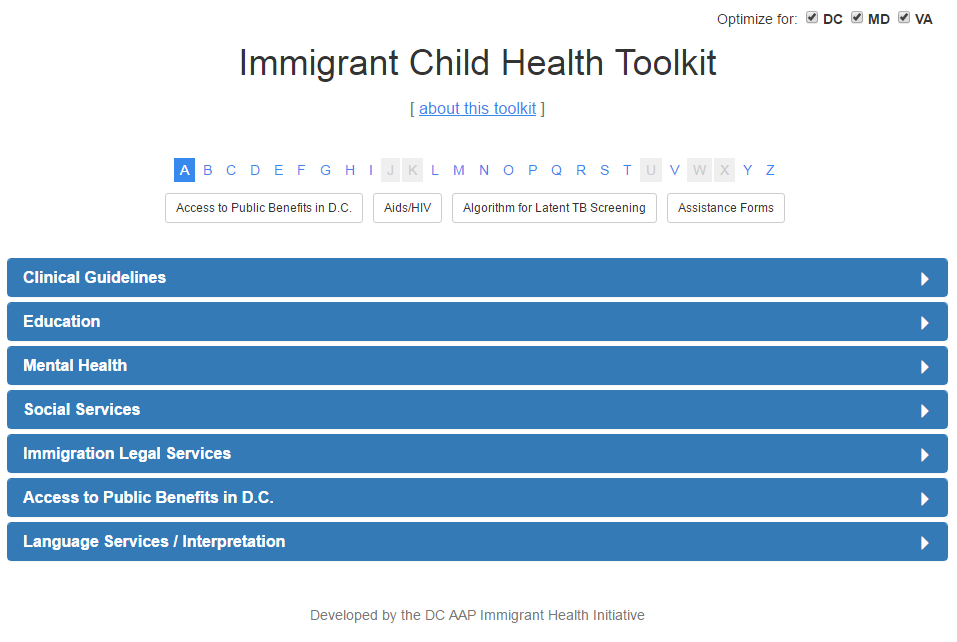 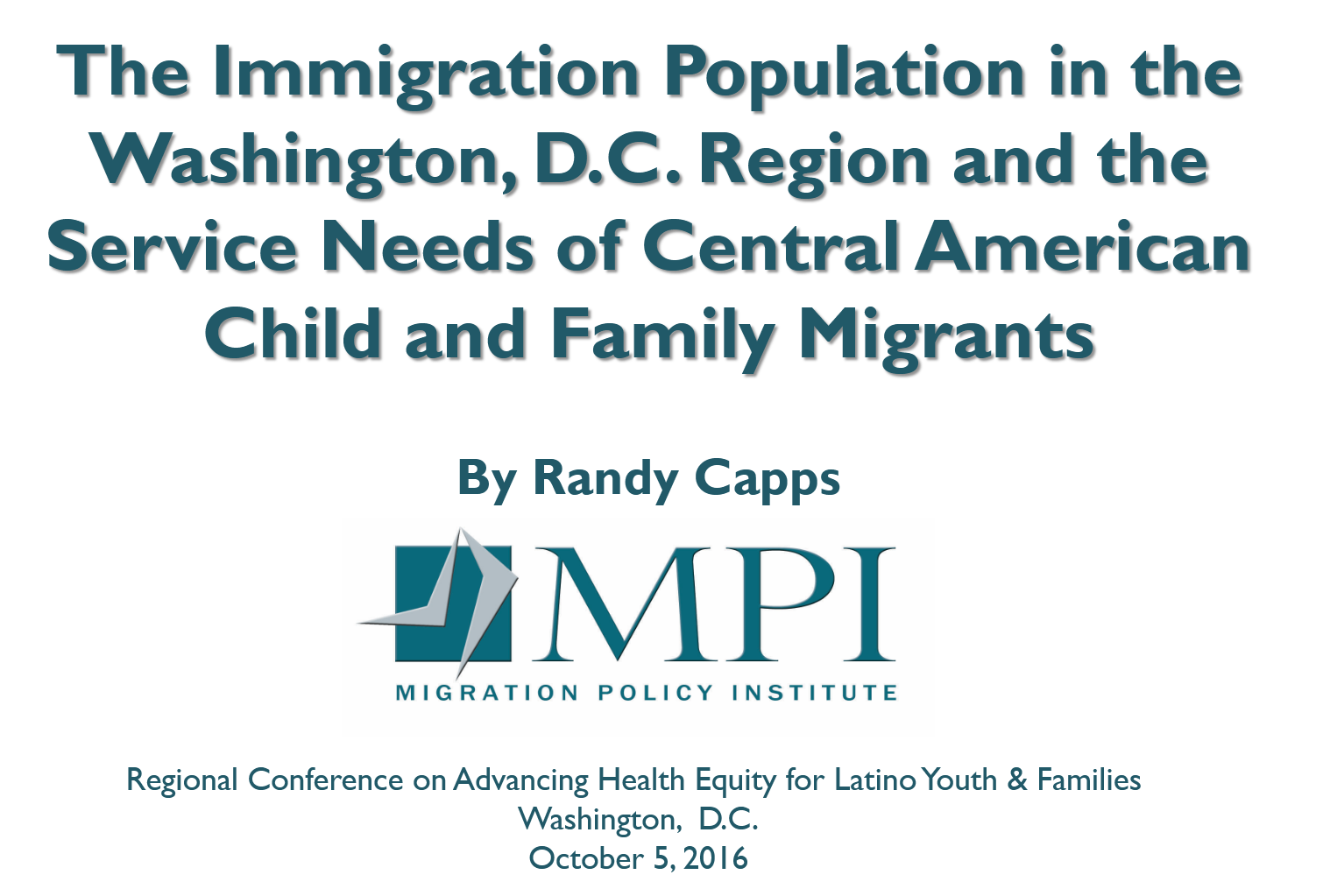 The Immigrant Population in the Washington, DC Region and the Service Needs of Central American Child and Family Migrants

While the growth of the total immigrant population in the National Capital Area has slowed since 2010, the size of the population is still growing. Half of the region’s foreign-born population lives in Fairfax or Montgomery counties, and two-thirds of the region’s undocumented immigrants live in Fairfax, Montgomery, or Prince George’s counties. Furthermore, 10% of the unaccompanied children who entered the United States between FY14-FY16 were released to sponsors in the National Capital Area. Randy Capps, Director of Research for U.S. Programs at the Migration Policy Institute, presented new statistics at the 2016 Regional Conference on Advancing Health Equity for Latino Youth and Families. View slides for the following data:

In 2016, RPCC partnered with the Avance Center for the Advancement of Immigrant/Refugee Health and the Metropolitan Washington Council of Governments to host the Annual Latino Health Disparities Conference. The conference addresses health disparities affecting Latino immigrant communities, with the goal of sharing emerging research, best practices, and community perspectives. Check out the Conference webpage for materials from the most recent and past conferences, including agendas, event summaries, and videos of sessions: 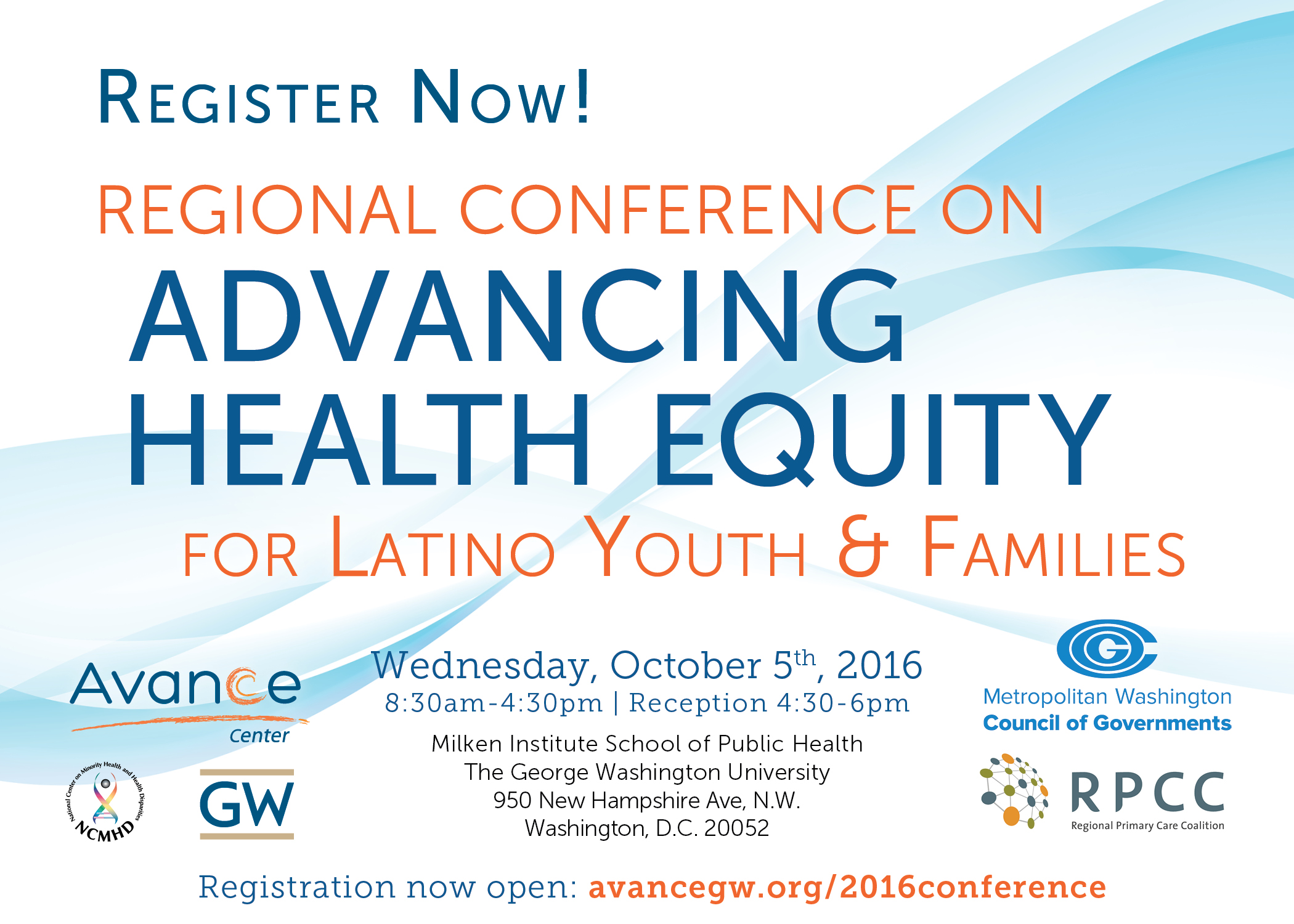 How DACA Affects the Health of America's Children

Deferred Action for Childhood Arrivals (DACA) has awarded temporary work permits and protection from deportation to undocumented young adults who were brought to the United States as children. It covers nearly 800,000 immigrants, many of whom now have children of their own. The DACA program has led to dramatic improvements in the mental health of children born to immigrant parents, reducing anxiety disorders by more than half, compared to children born to DACA-ineligible parents.

Why Use a Trained Medical Interpreter?

Trained medical interpreters are an asset for health care providers who must meet the needs of populations with increasing cultural and linguistic diversity. The use of skilled professional interpretation for medical services can improve healthcare access and outcomes, and help prevent medical errors.

La Clinica del Pueblo provides trained interpreters for many clinics and providers in the National Capital region and conducts “Bridging the Gap” training for medical interpreters using an evidence-based curriculum developed in Seattle. This program provides participants with a certificate for successful completion.

Immigration as a Social Determinant of Health: Proceedings of a Workshop

As part of the Bold Idea initiative, Princeton AlumniCorps and Appleseed hosted a webinar presentation and Q/A on the topic of trauma and mental health in immigrant and refugee communities, including the effects of the current political climate on mental wellness and the generational impact of chronic stress on families. Speakers included Dr. Maria Nardone, an Adjunct Professor of Psychology at Fordham University, and Dr. Usha Tummala-Narra, an Associate Professor in the Department of Counseling, Development, and Educational Psychology at Boston College. 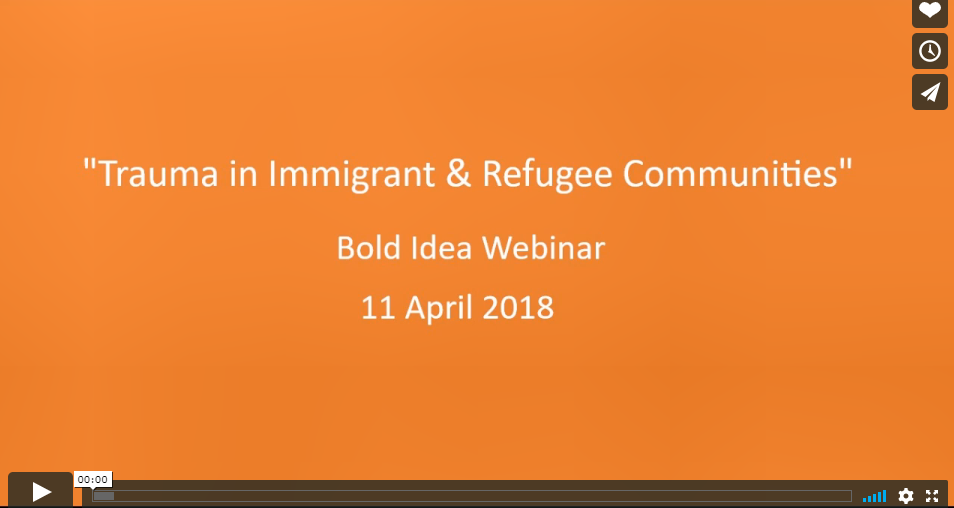 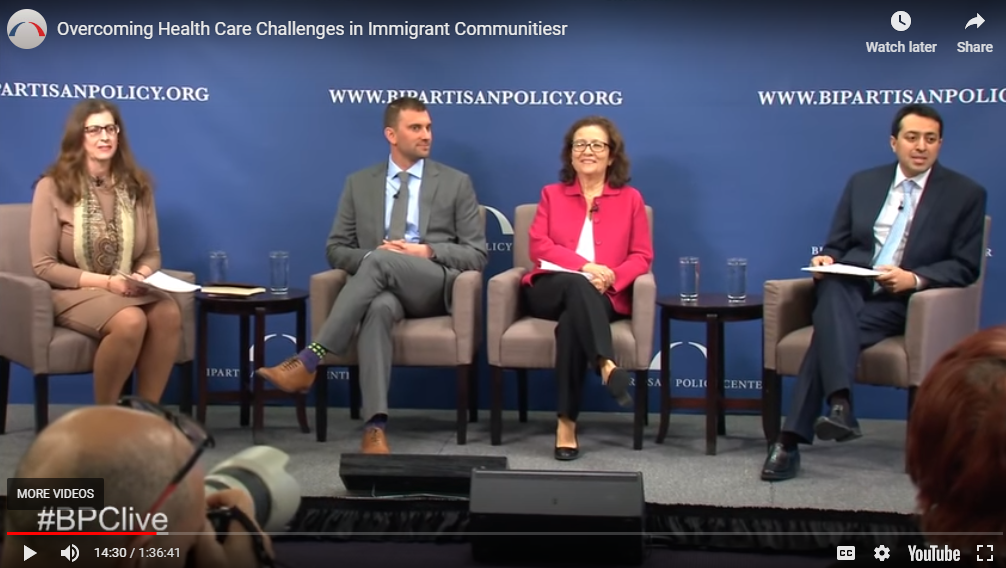 The briefing, Overcoming Health Care Challenges in Immigrant Communities, discussed challenges to immigrant communities accessing health care and social services—including cultural, linguistic, coverage, and other barriers—and how this impacts broader population health and well-being. The conversation during this briefing was led by co-moderators with backgrounds in health and immigration policy, respectively, and covered real-world challenges and solutions alongside research and general trends.

For information on immigration and refugee services, see the resources compiled by Catholic Charities USA below.

A Study of Asylum Adjudication in Family Detention
This report presents findings from an empirical analysis of asylum adjudication in family detention. Based on government data from over 18,000 immigration court proceedings, this report documents how families detained in U.S. family detention centers proceeded through the court process. It reveals a growing system of detention that presents serious barriers to justice and a fair court process for asylum-seeking families. Find more details here.

No Child Should Face Immigration Court Alone
This fact sheet provides some statistics on the number of unaccompanied children in the U.S., what legal protections they have, how KIND advocates for these children, and what others can do. Access more information here.

The Legal Rights of Separated Children

In this web page, KIND identifies and briefly describes the legal rights that children in immigrant families have in the context of family separation. Click here for more information.

The American Academy of Pediatrics developed this toolkit to provide information and resources for pediatricians related to immigrant child health. Access the Toolkit here.

Suicide and Refugee Children and Adolescents

This new CICW research brief reviews the existing literature on the impacts of immigration detention on children and families and provides recommendations to support and promote their well-being. Read the full brief here.

If you have contact with young children who have experienced trauma, these resources from the Sesame Workshop in both English and Spanish would be great to have on hand.  These free resources are now available online under “Traumatic Experiences.” Read more here or watch a brief video here.