According to the 2017 Annual Point-In-Time Survey conducted in 9 jurisdictions, there are 11,128 people experiencing homelessness in the Washington metropolitan area in 2017, a 9% decrease from 2016. The survey includes data from Frederick, Montgomery and Prince George’s Counties and the cities of Frederick and Bowie in Maryland; the City of Alexandria and Arlington, Fairfax (including Falls Church and Fairfax), Loudoun and Prince William (including Manassas and Manassas Park) Counties in Virginia; and the District of Columbia.

Several factors have contributed these numbers: as housing costs across the region rise, wages, especially for less-educated workers, are not keeping pace—leading to limited affordable housing options and high housing cost burdens, especially for the region’s extremely low-income households. According to analysis by the National Low Income Housing Coalition, the hourly wage necessary to afford rent for a two-bedroom apartment in the Washington metropolitan area in 2017 was $33.58. The minimum wages in DC, suburban Maryland, and Northern Virginia are significantly less at $12.50, $9.25, and $7.25, respectively. In other words, depending on where a person works and lives within the region, a household would have to work a collective three to five full-time, minimum wage jobs, simply to afford a decent two-bedroom rental home. According to analysis by the Urban Institute, over half of renter households in the District are cost-burdened, including 28% that are severely cost-burdened.

Housing costs are not the only factor impacting the ability of individuals and families to maintain stable housing. The interplay between health and homelessness is complex. Health conditions can be contributing factors to homelessness, and homelessness can exacerbate poor physical and mental health, contributing to anxiety, depression, insomnia, and substance abuse. In the National Capital region, a significant number of childless adults experiencing homelessness were formerly institutionalized, and/or suffer from severe mental illness, chronic health conditions or physical disabilities. These conditions are frequently compounded by substance use disorders. Among homeless adults with children, the most prevalent characteristic is a history of domestic violence trauma. This is especially troubling as evidence suggests that people experiencing homelessness are less likely to have regular sources of health and behavioral health care: they are more likely to visit the emergency room, have longer hospital stays if admitted, and are at higher risk of readmission.

Across the region, efforts are underway to reduce the number of people experiencing homelessness. Prevention and diversion efforts, as well as rapid re-housing, are at least partially responsible for the decline in homelessness seen in some jurisdictions. Furthermore, evidence that housing leads to reductions in health care utilization and costs is growing, supporting “Housing First” initiatives, which maintain that housing homeless individuals first enables them to more effectively manage their physical and mental health conditions, including substance use disorders. To improve health outcomes, many jurisdictions are utilizing supportive housing, an evidence-based intervention that pairs permanent affordable housing with wrap-around supportive services.

Cross-sector collaboration at federal, state and local levels has resulted in the creation of initiatives to address targeted populations at high risk for homelessness, including veterans, people with HIV/AIDS, and those experiencing chronic homeless. Federal funding for these initiatives comes from a variety of programs, including:

Federally Qualified Health Centers play a large role in addressing the health needs of people experiencing homelessness, as they provide preventive and primary health care services to all individuals, without regard for their ability to pay. States that have expanded Medicaid under the Affordable Care Act have additional options, as expanding coverage to single, childless adults significantly increased health coverage for people experiencing homelessness. DC, Maryland, and Virginia have all acquired waivers to offer specialized support services for certain groups, including the elderly and individuals with disabilities, as well as those with HIV/AIDS in Virginia. Maryland has also acquired a demonstration waiver to establish the Maryland HealthChoice managed care program. HealthChoice provides members with a single primary care medical home, and has greatly expanded residential treatment for individuals with substance use disorders. As of 2017, Maryland has also used this waiver to create a community health pilot program, called Assistance in Community Integration Services (ACIS), which provides housing-related support services for high-risk, high-utilizers who are transitioning to the community from institutions or are at high risk of being placed in an institutional care facility, including a jail, substance abuse or mental health treatment facility, hospital, or other similar facility. Medicaid funding supports many other programs serving the homeless population across the region, including: 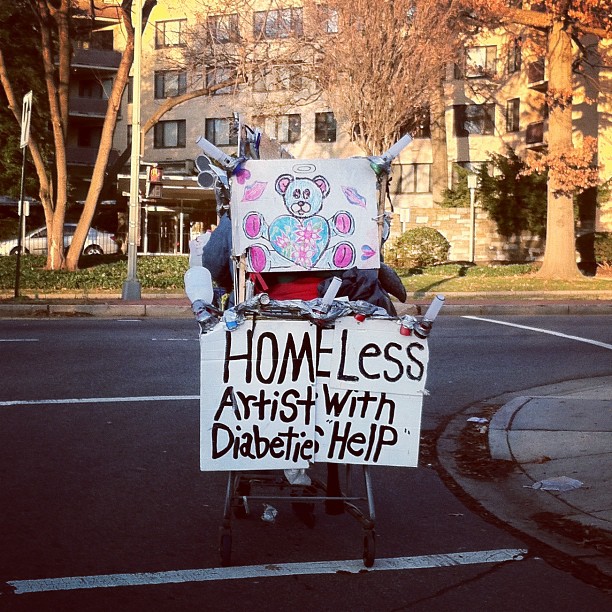 While efforts to move individuals into permanent housing are important, they do not address the root causes of the problem. This would require a combination of expanding affordable housing opportunities, increasing education and job training opportunities, increasing wages across the region and ensuring consistent access to affordable health and behavioral health services. It would also require a conscious effort by policy-makers to address displacement resulting from economic development initiatives.

For more information on homelessness and health in the National Capital region, check out the resources below.

In January of each year, the Metropolitan Washington Council of Governments analyzes findings from a survey of the region’s homeless and formerly homeless population in nine metropolitan Washington jurisdictions. As of January 23, 2019, 9,794 people in these nine jurisdictions were experiencing homelessness, a 7% decrease from 2018 and the first time that the literally homeless total has been below 10,000 persons. This is the lowest number of persons counted experiencing homelessness since the region began coordinating in 2001. Although the region is noting decreases in homelessness, these trends vary jurisdictionally. Check out this link for reports outlining findings, highlights, and trends from all past surveys, including demographics, income and employment, unsheltered and chronic homelessness, and bed availability, as well as recommendations for ending homelessness in the National Capital Area.

Housing Security in the Washington Region

Although the National Capital Area is home to some of the wealthiest counties in the country, it also has one of the highest costs of living. Many families living in this region struggle to earn a living wage. Affordable housing is key to reducing the incidence of homelessness; however, there is no one-size-fits-all solution. Each jurisdiction has different needs based on the unique characteristics of their homeless populations. In this 2014 report, the Urban Institute outlines the supply of and gaps in affordable housing across many housing needs and household types in each of the region’s jurisdictions. 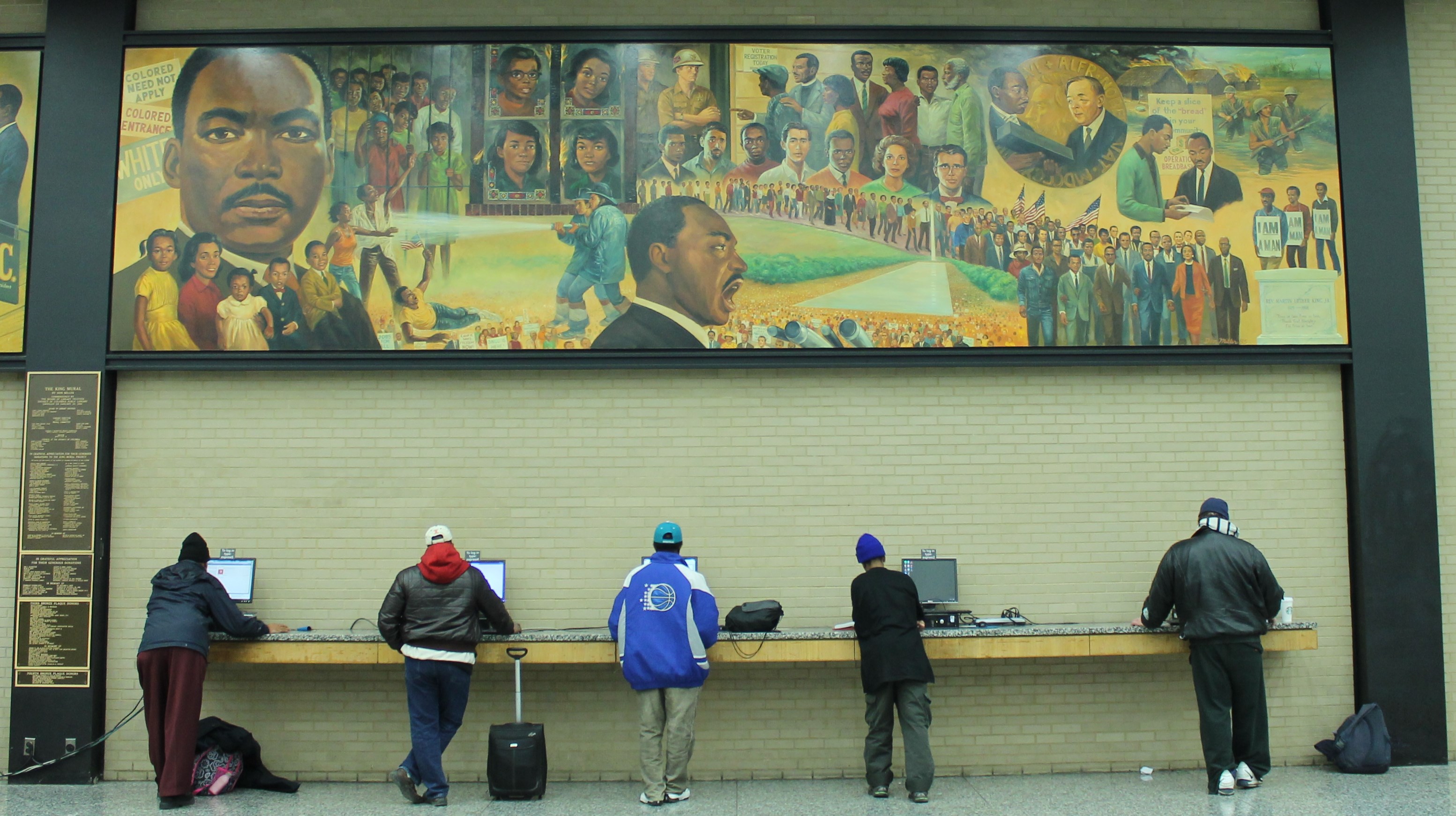 Each jurisdiction has released their own strategic plans for ending homelessness. Read them here:

Additionally, the state of Maryland has released an Overview of Homelessness and Homeless Services in the state, including state and county-specific initiatives. 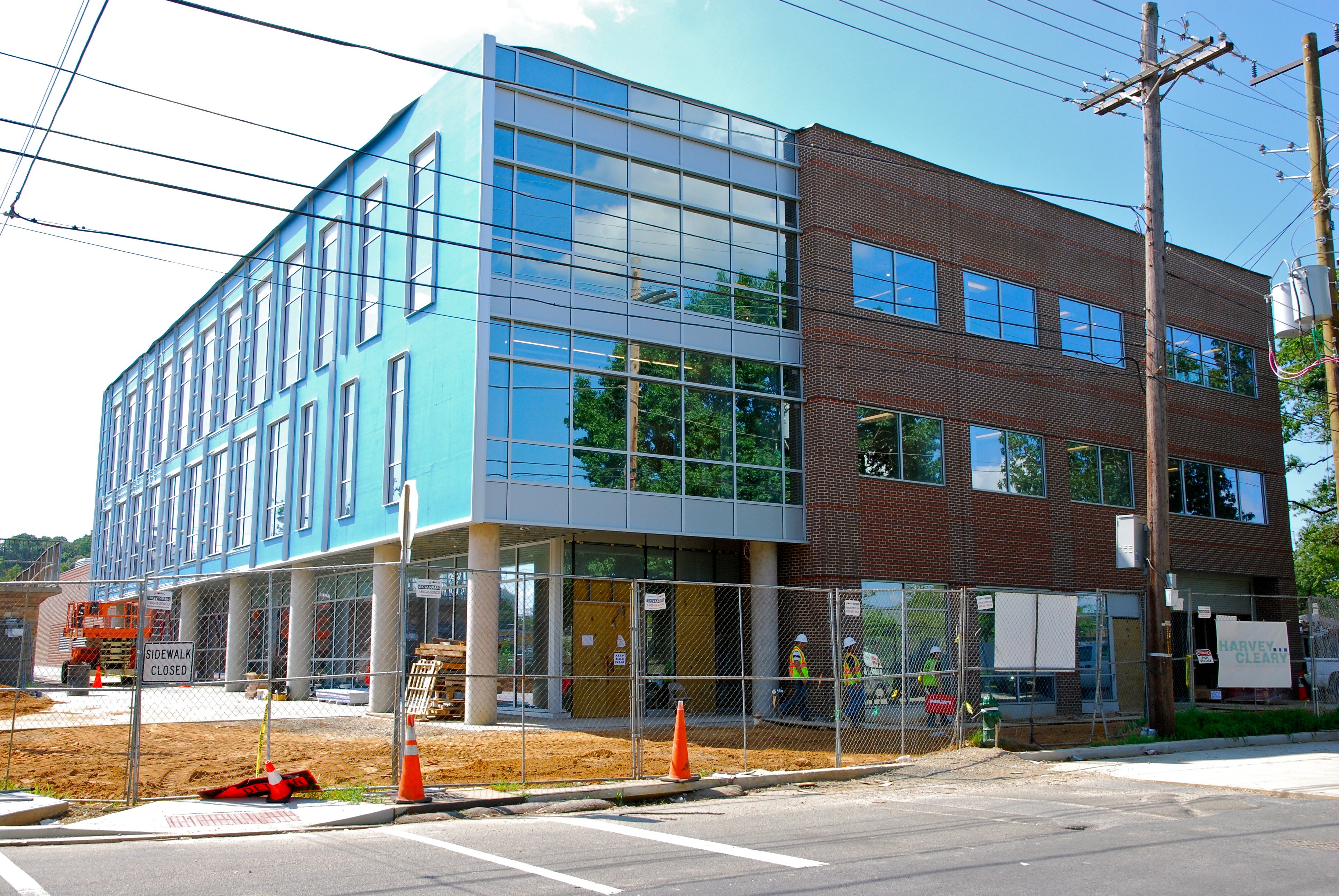 Making the Case for Supportive Housing and Health Works! Co-Location

Collaborations between local primary health care, mental health, and substance abuse service providers and housing providers can be beneficial in leveraging resources to fill gaps in community services. There are many ways to implement these partnerships, including care coordination, health center co-location at supportive housing sites, and full service integration with housing providers. This guide provides communities with information necessary to identify and meet the needs of their specific population. In 2011, DC-based Pathways to Housing, Unity Health Care, and Martha’s Table received a 5-year SAMHSA grant for a co-location project that provided on-site integrated behavioral health and primary care services to supportive housing residents. The partnership led to reduced hospital emergency department visits among the target population.

Among individuals experiencing homelessness, less reliable access to the full spectrum of care can often lead to worse health and quality of life outcomes as well as higher healthcare expenditures. In facilitating stronger connections to primary care and other wrap-around services, supportive housing can decrease unnecessary or preventable healthcare utilization while improving outcomes for these individuals. There is an immense body of research linking housing instability with health outcomes in a broad variety of ways. The Corporation for Supportive Housing (CSH) has compiled a review of twenty-five studies in an effort to determine: 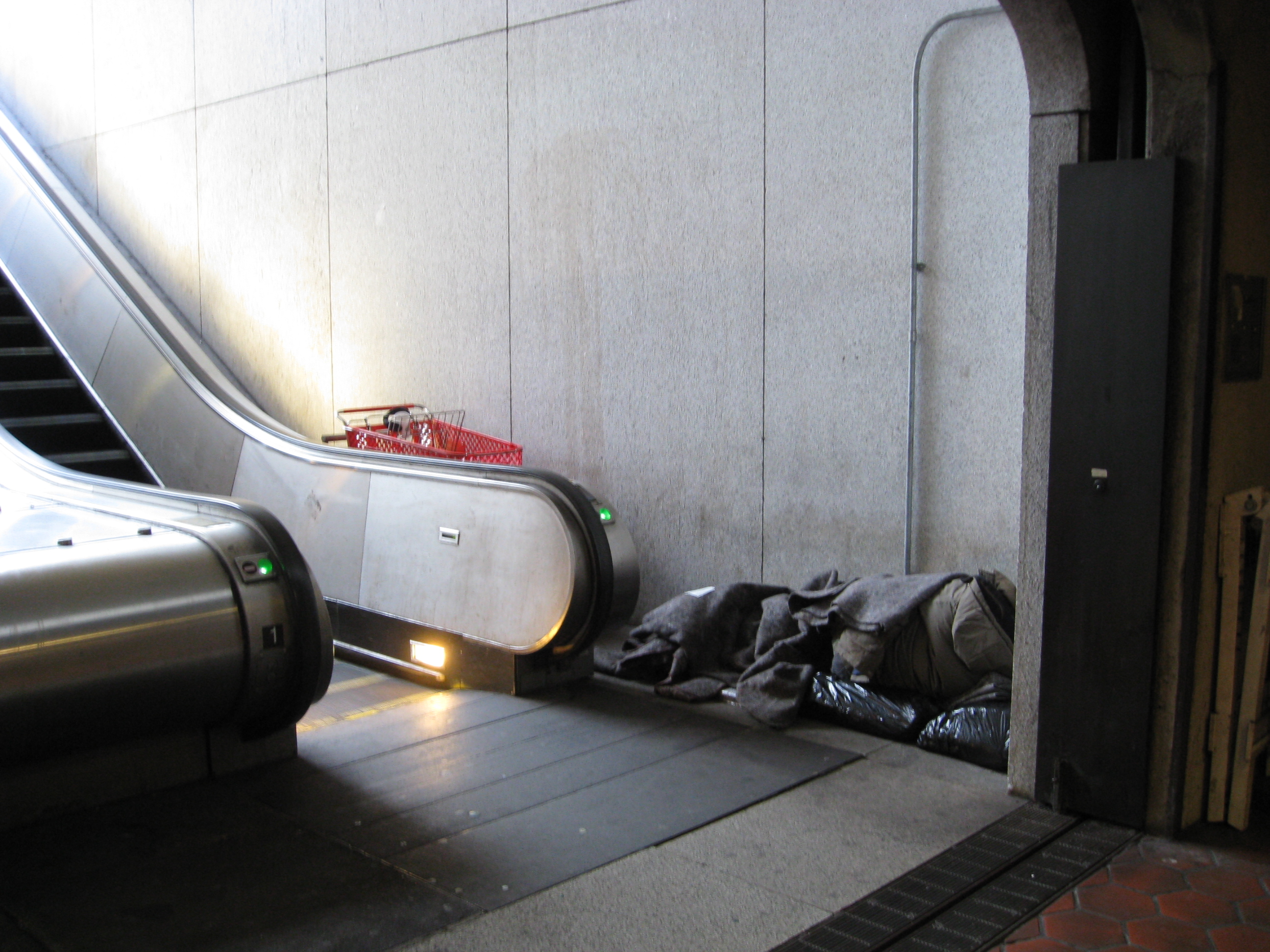 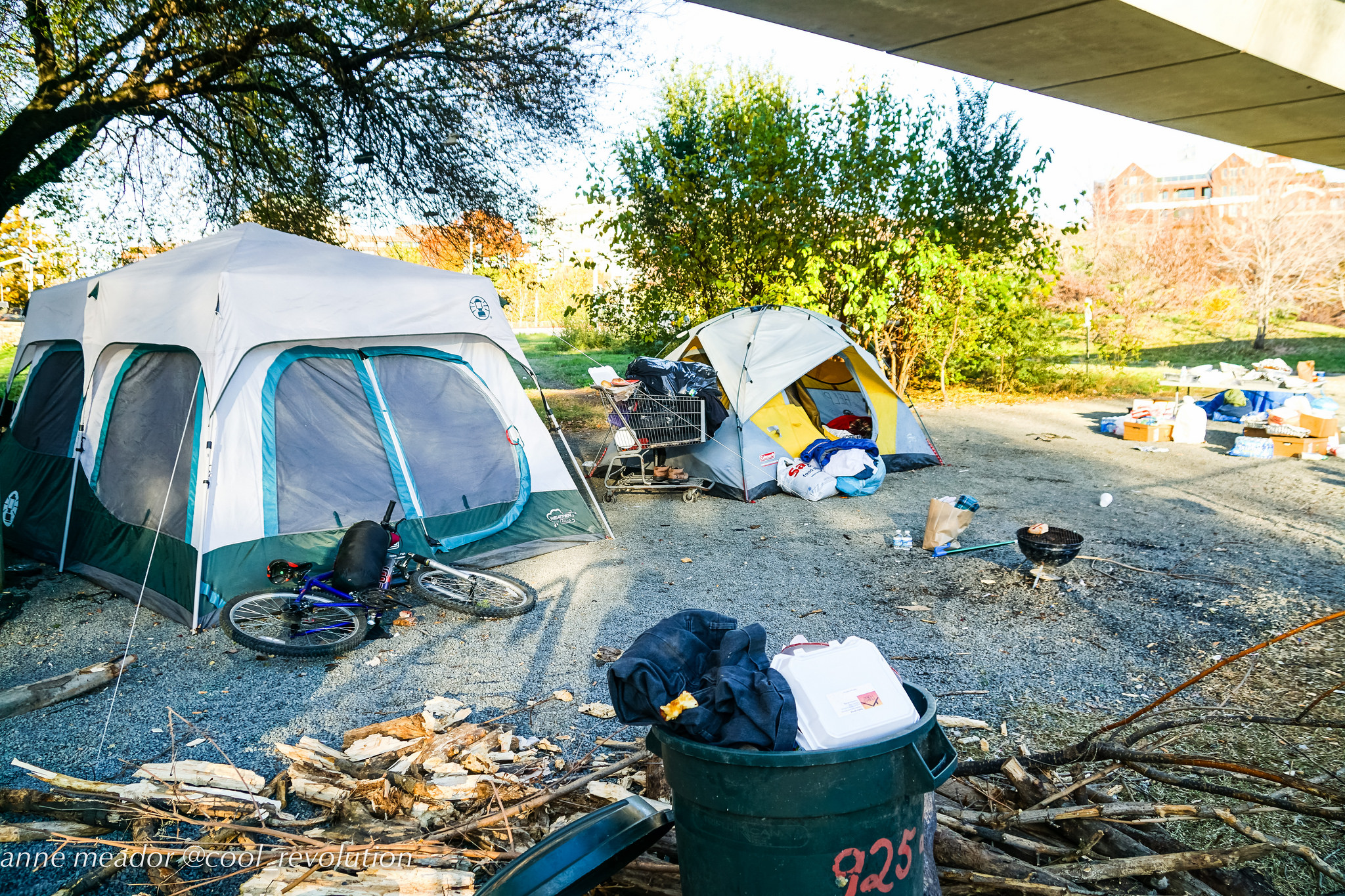 Health Affairs: Housing is a Prescription for Better Health

Coverage of Housing-Related Activities and Services for Individuals with Disabilities

While Centers for Medicare and Medicaid Services (CMS) does not reimburse states for room and board in home and community-based services, it can assist states with covering certain housing-related activities and services. CMS has released an informational bulletin with an overview of these options, including:

The U.S. Department of Health and Human Services has released a detailed primer and catalogue of emerging practices on using Medicaid for people experiencing chronic homelessness and permanent supportive housing. 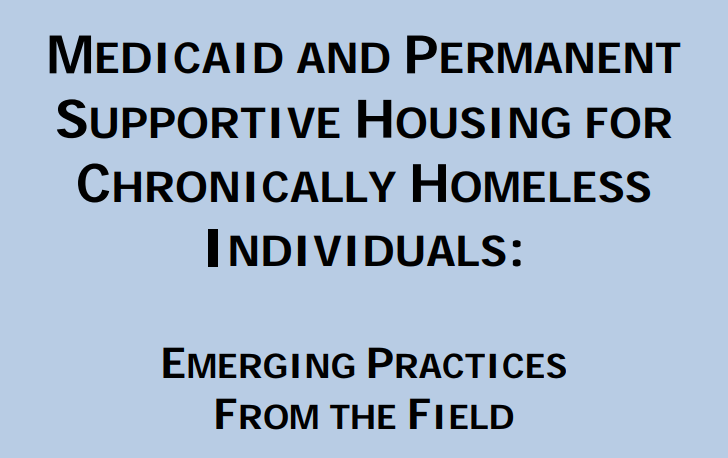 The National Health Care for the Homeless Council is an organization that primarily focuses on health and behavioral health care strategies for federally funded Health Care for the Homeless programs. They partake in advocacy and research, and offer trainings and a variety of resources to support public and private entities interested in the problems of health care and homelessness.